From sail to power

For one reason or another, some of the most avid sailors take the plunge and transition from sail to power. It’s a natural progression, and for David Gordon, this change resulted in the purchase of one of his “bucket list boats,” the Swift Trawler 50. Sailing since about 1973, David had owned four sailboats before the phone call which led to the purchase of his first trawler.

“The fellow who sold me my last sailboat phoned me up in October or November of 2014 and said, ‘We have this Swift Trawler 44…would you be interested in it?' My wife and I looked at each other and said we’re about ready to make a change,” David recalled. He felt his knees and elbows were not up to sailing like they used to be and that a powerboat was easier to take care of, live on during the summer, and cruise the canal systems in Canada that he and his wife, Beth, tend to travel on. Not to mention, the price offered was hard to resist. So the Gordons bought the 44, but another Swift Trawler had caught David’s eye during their initial research.

“When we bought the 44, I actually had fallen in love with the 50 though having never seen it, just reading about it in the brochure. I thought of it as a bucket list boat, basically. It was one of the ones I’ve always wanted,” he admitted. He felt it was even more suitable to live on for the summer since it has all the comforts of home like an induction worktop, dishwasher, washer and dryer.

"When we bought the 44, I actually had fallen in love with the 50 though having never seen it, just reading about it in the brochure."

After suffering the loss of his sister last year, David had an epiphany. “I decided that if you’re going to do something, you have to do it now because you may not get a chance to do it later,” he said. So he and his wife attended a boat show nearby and were put in touch with Grant Rule of Maple City Marine in Chatham, Ontario. From there, they bit the bullet, bought their new Swift Trawler 50 and haven’t looked back since.

"The Beneteau Swift Trawler 50 that we have is a lovely design. It’s got some beautiful amenities, and we’re very, very pleased with the construction of it. It’s absolutely gorgeous. I would recommend it quite highly,” David added. “We find that the French boats are beautifully designed." 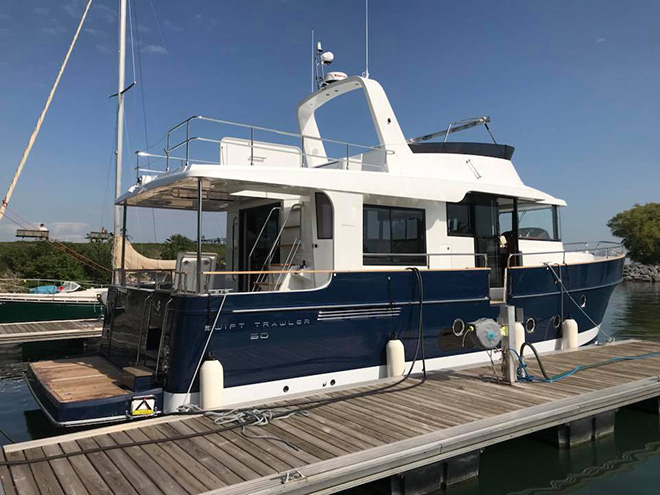 David and Beth have big plans ahead for their trawler too! They love being on the water and have set their sights on some serious voyages. “We’ve planned out our next summer. We have two canal systems up here (the Rideau and the Trent–Severn) we want to do,” he mentioned. They also are considering taking on the Great Loop. “We think the boat is well designed for that,” David shared.

But traveling is not all this boat will do; the Gordons also like to use her for the benefit of others. “We offer cruises on our boat at charity auctions to take people out for an afternoon on Lake Ontario. We just did that for a cancer fundraiser. It’s a lot of fun,” David shared. Doing this allows them not only to give back but also meet a variety of people. “We love the people we meet. There are all sorts of interesting folks you meet when you’re traveling,” he added.

"We offer cruises on our boat at charity auctions to take people out for an afternoon on Lake Ontario. We just did that for a cancer fundraiser."

David and Beth will always be sailors; it’s a sport they love. But now, the Gordons are also the best kind of powerboaters: adventurous, charitable, and friendly.